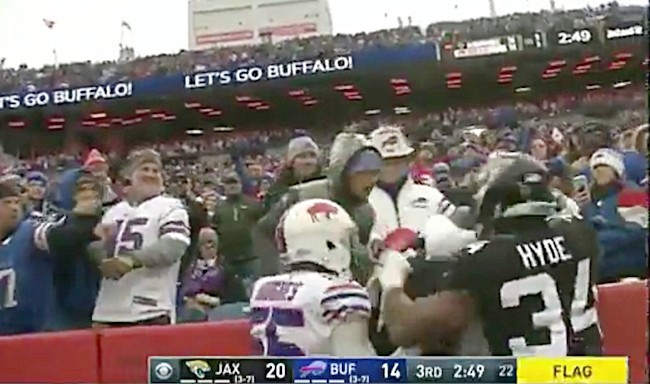 The Jaguars and Bills met on Sunday in Buffalo in the rematch of their playoff matchup a year ago, but this time around there was far less on the line as both teams came into the game at 3-7.

Things got very testy in the third quarter with the game tied at 14-14. Donte Moncrief went up and pulled down a catch at the one over Levi Wallace as the two players wrestled for the ball as they came to the ground.

The two refused to let go, wrestling over the ball on the ground for a full minute, but no one paid much attention to that as others got involved and a brawl broke out on the sidelines.

Jaguars running back Leonard Fournette and Bills’ defensive end Shaq Lawson were both tossed from the fight.

Leonard Fournette and Shaq Lawson both ejected. Still heated in the tunnel. pic.twitter.com/3R9xfP8vqk