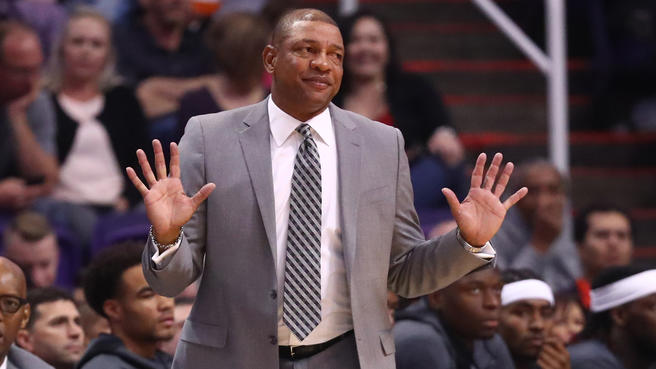 Los Angeles Clippers head coach Doc Rivers has been fined $50,000 for “inconsistent comments” on Kawhi Leonard after being sidelined for the second time this season due to “load management.”

The Clippers have been without Kawhi Leonard for the second time this season, with both games being back to back, and nationally televised.

The most recent game was last night against the Milwaukee Bucks, as reigning MVP, Giannis Antetokounmpo, took advantage of the Kawhi-less Clippers by claiming victory, one assist shy of a triple-double.

The Clippers have gotten away with sitting out Kawhi due to the fact that the medical staff claimed he was dealing with a minor injury. However, Rivers claimed that Leonard has been healthy since the beginning of the season, resulting in a hefty fine.

This was the statement Rivers released on Leonard:

“He feels great. But he feels great because of what we’ve been doing. We’re just going to continue to do it. There’s no concern here. But we want to make sure. I think Kawhi made a statement that he’s never felt better. It’s our job to make sure he stays that way.”

The NBA’s official statement is below:

“Following additional review of the LA Clippers not playing Kawhi Leonard in last night’s game against the Milwaukee Bucks, the NBA has confirmed that the team’s decision to sit Leonard for management of an injury was consistent with league rules.  The team has reasonably determined that Leonard is suffering from an ongoing injury to the patella tendon in his left knee and has been placed by the team at this time on an injury protocol for back-to-back games.

“The NBA has fined the Clippers $50,000 for statements, including by head coach Doc Rivers, that were inconsistent with Leonard’s health status.”

Leonard sitting out has created an uproar in the league, as fans have been upset about not getting to see the Finals MVP in action. Fortunately, the NBA has decided on taking action against the Clippers in order to put an end to this strategy.

Thanks for reading! Tristan is an NBA Writer for Playmaker HQ who covers all 30 teams. You can follow him on Twitter @TristanRyan720. Stay tuned for future articles.