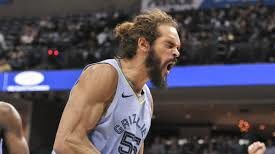 Joakim Noah will join the Los Angeles Clippers for workouts this week.

Joakim Simon Noah is a professional basketball player who last played for the Memphis Grizzlies of the National Basketball Association. Born in New York City to a Swedish mother and a French father, he holds American, Swedish and French citizenship.

Does Joakim Noah still have it?