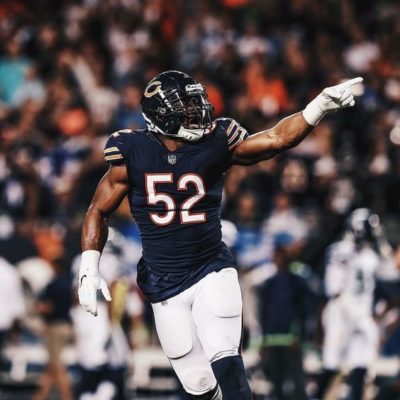 While most have acknowledged the Bears defense as the best in NFL over the course of the season, I doubt many anticipated Khalil Mack and company to hold the Rams high voltage offense to just 2 field goals.

This was an intriguing match-up from the start, a Pro Bowl exhibition with supreme talent from each team on both sides of the ball. Yet, only the stars from Chicago were able to shine this Sunday night.

NFL leading rusher Todd Gurley and the young stud QB Jared Goff couldn’t find a rhythm. Gurley had only 28 rushing yards on 11 carries, and Goff coughed up 4 interceptions on the night. The Bears were ferocious from the opening; 4 different defenders collected an interception tonight including Kyle Fuller for his 7th pick of the season. In addition, Khalil Mack got his 10th sack of the season and Eddie Goldman recorded the first safety of his career. The Bears offense was only capable of scoring 1 touchdown, nevertheless their defense was enough to carry them to victory.

The Rams had the 2nd highest scoring average in the NFL heading into Chicago, averaging 34.9 points per game. But, the Bears were able to suffocate the Rams offense with an overwhelming tenacity. The final score was 15-6, leaving the Rams with a long flight ahead of them to return home to Los Angeles with hopes to rebound next week.

If you haven’t considered the Bears to be a contender so far, now is the time to pay them the respect they earned.

Check out the highlights from the game tonight below.